Uncovering the top 5 seaside settlements of all the Cyclades!

Lovers of the Cyclades united! This article is for you as we are going to travel to our favourite Cycladic settlements and villages as well as some of the most sublime luxury villas in Greece found on each island. 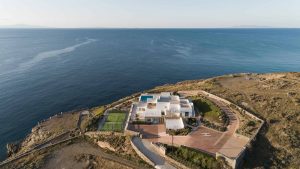 Heading to Syros, Mykonos, Amorgos, Tinos, and Folegandros to uncover 5 graphic settlements you should definitely have on your bucket list for next summer. And since we are big fans of villa holidays in Greece, we have your accommodation covered as well!

Ermoupolis @ Syros
The personality of the Lady of the Cyclades, Syros, is perfectly illustrated in its capital and port: Ermoupolis. Aristocratic and cultured, Ermoupolis radiates its glory through the past decades and its glorious legacy. Dotted with colourful mansions, marble-paved streets, and several museums and theatres, Ermoupolis has one too many secrets for its visitors. We will let you discover them on your own; suffice it to say that this is not your typical Cycladic Chora.

Your villa in Syros
Finsbury
If you want to unwind in one of the most secluded villas in Syros, Finsbury should be your pick. A voluminous property with eyes deep in the Aegean Sea that comprises the main house and three fully autonomous, separate guesthouses, plus numerous luxury amenities and facilities among which is a private helipad, paddle court, jetty, and jacuzzi. The villa’s 10 guests will definitely feel like royalty!

Chora @ Mykonos
The Chora of Mykonos is undeniably the cosmopolitan hub of the entire Cyclades (maybe even entire Greece). Each summer dozens of jetsetters and celebrities from around the world overwhelm its narrow, paved alleys to get a taste of the worldwide famous Mykonian landscape. A bustling seaside settlement where the typical Cycladic architecture comes one with eclectic boutiques of premium brands and the crème de la crème of fine dining and clubbing. 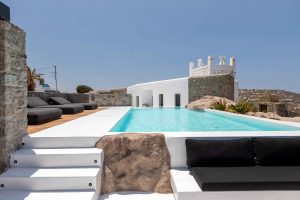 Your villa in Mykonos
Nelson
Found right in Chora, Nelson is one of the exquisite villas in Mykonos, featuring an ultra-modern design that perfectly pairs with the traditional style. Ideal for 13 guests, this is your own private mansion with a vast courtyard, a refreshing infinity pool, a jacuzzi, and an exciting indoor cave heated pool overlooking the mesmerizing Aegean. Dancing in a symphony of white and black, this opulent home will invigorate your body and embrace your soul in a heartwarming aura.

Chora @ Amorgos
The alternative destination, Amorgos, also features one of the most discerning capitals, the Chora. Built on a high spot at the centre of the island, Chora is a large, picturesque traditional settlement with winding paved alleys, whitewashed houses, and charming squares to sip your coffee (or wine) under the shade of dense plane trees, surrounded by bougainvilleas. Stroll through its labyrinth alleys and discover cute and cozy cafes and dessert shops, indulge in breakfast or brunch made with local products, and, in the evening, sway to the rhythms of jazz, modern or Latin music in its busy bars. Chora also hosts several art events and open-air fairs during summer where traditional music and dancing are accompanied by local delicacies and, of course, the famous raki of Amorgos! 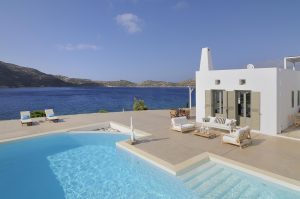 Your villa in Amorgos
Chelsea
Located in Agios Pavlos, less than 20’ by car from Chora, Villa Chelsea is a laid-back Cycladic villa that completely integrates into its natural setting. Featuring panoramic views of the sea and the area of Agios Pavlos from its open terrace, this is a place for those who want privacy but also a fun time as a group. The villa can sleep 10 guests on three separate levels – the ground level and two more, one with its own kitchenette and living area – offering autonomy and seclusion. Plus, it is found in one of the most treasured parts of the island in between its two hotspots, Chora and Aegiali. Definitely one of our top villas in Amorgos!

Pyrgos @ Tinos
The largest village of Tinos that has been officially declared as a traditional settlement, Pyrgos is a piece of art throughout each and every corner. One of the most cultured areas of the entire Cyclades, Pyrgos bears a legacy in arts and culture that goes back dozens of years. The settlement is famous since the 18th and 19th centuries for marble crafting, till today, there are still marble-crafting studios, the famous Fine Art School of Pyrgos, and a dedicated gallery. Pyrgos (or Panormos, are found at about 40’ by car from the charming Chora. 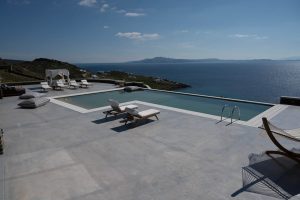 Your villa in Tinos
Marin
Just a stone’s throw from Tinos Chora and a 40-minute drive from Pyrgos, Villa Marin is found at Agios Fokas and consists in a modern home that will amaze you at first sight. One of the most precious wellness villas in Tinos, Marin features several pampering and rejuvenating amenities, such as a hammam, jacuzzi, hydromassage, massage table, sauna, and spa room. Apart from that, the villa offers utmost privacy to its guests as the top level of the property features 4 bedrooms and a common space with a kitchenette while the ground level sleeps 4 guests in 2 bedrooms and also offers a spacious living room, a bar, a kitchen, and a dining area.

Chora @ Folegandros
Our list of the most beautiful, traditional settlements of the Cyclades could not but include the scenic Chora of Folegandros. A petite settlement that climbs up the raw mountain and concludes at the famous Church of Panagia through a whitewashed, winding path of steps. Actually, this is the landmark picture of Folegandros Chora drenched in the sunset colours of the Aegean sky. The small, graphic village is one of the oldest Medieval towns in the Cyclades and a place where traditions and fairs revive until today making visitors want to stay forever!

Your villa in Folegandros
Circle
A balcony to the Aegean. This encapsulates the whole essence of Villa Circle which boasts stunning, panoramic views of the sea and the rough mountains of Folegandros. Drenched in Cycladic charms and relaxing vibes, this is our pick among our villas in Folegandros that will immerse you in the most tranquil and serene stay. Ideal for 8 guests in total, the villa consists of a main top-level unit and a ground-level guesthouse for 2. Welcome to the most relaxing summer holiday ever only 10’ away from the Chora!