An elite destination drenched in blue and green for nature and tranquillity lovers.

Meganisi is located on the east of Lefkada, right between the island and the west coast of Greece. Literally a tranquillity haven with lush, thick vegetation and untouched coasts, Meganisi is also a favourite destination for sailing aficionados. Its turquoise, crystal-clear waters reflecting the intact, natural gorgeousness of the mainland allure visitors in an eternal love affair like no other.

Its small extend combined to its proximity to the popular Lefkada and Kefalonia, have left Meganisi unharmed from mass touristic development and visiting crowds. Featuring some of the area’s most charming beaches and only a few settlements and villages, Maganisi is indeed the ultimate hideaway for utterly peaceful holidays.

Graphic landscapes, traditional settlements and sweeping natural beauty combined with the scarce public transport and cars make up the perfect authentic summer experience and one of the most genuine in the entire Greece.

Meganisi is the biggest and most visited island of the complex of small islands comprising its municipality: Scorpios (or Onassis island) and Scorpidi, Sparti, Kithros and many more.

Located on the northern part of the island, Vathy is a beautiful, traditional fish settlement and Meganisi’s main port. This is where the ferry boats from Lefkada moor along with most of the private sailing boats or yachts. Vathy is built at the inlet of a deep and narrow cove encircled by high, lush vegetated hills creating an astounding scenery. A few taverns and shops are found in the village while some of the island’s pebbled beaches can be reached on foot from there.

The submarine “Papanikolis” was one of the protagonists in World War II having played a crucial role in facing the enemy powers while its staff is considered to be of great bravery and skills. One of the two hideaways for Papanikolis was in Meganisi, at a cave that took its name from the historic vessel. The Papanikolis Cave is one of the largest and most beautiful caves in Greece measuring 120m in length and 60m width getting narrower towards its inner part, reaching 23m wide.

The second harbour of Meganisi, after Vathy, Spartohori is an authentic settlement nestled within the lush vegetated slopes of the island’s wild nature. Ideal for trekking and strolling, the village is a canvas of coloured, traditional houses and paved, narrow alleys. As it has been built on a hill, Spartohori also boasts amazing, unobstructed views adding up to its graphic scenery. The village is also a favourite mooring spot for sailing boats.

The last and smallest village on Meganisi, Katomeri is located on the eastern part of the island and while it is not a seaside settlement, a wind protected cove is only a few minutes away. Katomeri shares the picturesque landscapes of the rest of the island and as it is smaller and does not feature a harbour, it is more traditional and untouched than the other two. Some stone-built cottages with large yards and multi-coloured plants, a bakery and a few taverns travel visitors back in time.

Privacy, independence, elegance, breathtaking views from our luxury villas will leave you in awe. Discover The Greek Villas in all 34 destinations in Greece and give yourself the chance to experience the best vacation you can imagine.
View All

What to do & see on Meganisi

Meganisi is a place of unspoilt, mesmerizing landscapes, with a literally laced shore comprising of tongues of green land entering the deep blue sea and creating numerous long and narrow coves. This special geomorphology creates havens of tranquil bays that will embrace visitors whatever the season and direction of winds.

As such, Meganisi should be explored both by land and sea; embark on daily excursions with a vehicle around Meganisi’s stunning landscapes and make discoveries that will remain engraved in your memory forever. For those who prefer sea, the options are countless: isolated beaches, secluded coves and settings to die for. Mooring near the lush vegetated shores, where waters feature all possible shades of blue and green, is the ultimate back-to-nature getaway either plunging in the crystal clear sea or just cocooning on the deck under the soothing Greek sun.

Meganisi is also ideal for trekking aficionados: paths that traverse various parts of the island, uncover stunning shores and natural marvels. Some of the beaches on the island interconnect via small trails too thus visitors will combine hiking activities with the utter summer bliss in more than one beach.

As the island of Lefkada is quite near to Meganisi, a day-trip to this popular gem is a must! Moreover, sailing to the other small islands of the complex will fill travellers with pictures of virgin natural beauty and will absolutely invigorate body and soul with their fairytale-like settings and authenticity.

One of the most popular beaches on Meganisi, Spilia is a charming coast of whitish pebbles, emerald waters and trees that almost reach the water. The beach is partially organized and very close to Spartohori.

A stunning cove with tropical colours, Ambelakia is the most frequented from the gulfs around it. A favourite place for sailing boats, the beach is non-organized while there are two taverns for a meal with a view.

Quite long but with a narrow coast and only accessible by a dirt road or boat, Agios Ioannis never gets crowded. White pebbles and lush greenery reaching the waters, this is one of the most virgin beaches on the island.

This small cove is only a few minutes’ walk from Vathy, thus preferred by many visitors although it is not organized. Dense nature and natural shade from the trees are the its highlights for a relaxing day at the beach.

Actually two beaches, Mikro and Megalo Limonari, the coast is near Katomeri and can be reached via a dirt road. Both beaches are non-organized and feature white pebbles with patches of sand while they offer natural shade from the surrounding pine trees.

Only accessible by boat this is one of the most isolated beaches on the island. Fanari is highly preferred by private boats and yachts but its distinctive shape offers various secluded spots. There is also a beach bar for drinks and snacks.

One of the most unfrequented beaches on the island, Barbarezou is only reached by boat and consists in a long, wide shore of pebbles and rock formations. Also known as Cape Akoni this beach offers ultimate seclusion and tranquillity.

A very small cove located at the eastern part of the island, Elia is a small inlet reached by a steep path from Katomeri. Although quite secluded and small, this is a mooring point for boats thus it may get busy during high season.

How to get there

Meganisi is only connected by boat to its nearby islands of Lefkada and Kefalonia. Visitors can either choose to reach Lefkada by road and then take one of the regular ferry boat trips to Meganisi from Nydri or travel to Kefalonia and take the daily route to Meganisi, which lasts a bit longer. Meganisi is also connected to Ithaca once a day by boat. Sailing lovers could just reach the island on their own private yachts and take the opportunity to tour around the small islands of the area.

Due to its elite character, Meganisi is a preferred destination for sailing lovers and those who want utter relaxation in a luxurious private villa. Although very small and not developed for touristic exploitation, Meganisi boasts some stunning private villas with swimming pool nestled within its lush greenery and virgin nature. Holiday villas to rent are scattered throughout the island’s extend and The Greek Villas offers some of the best villas on Meganisi for its esteemed guests. 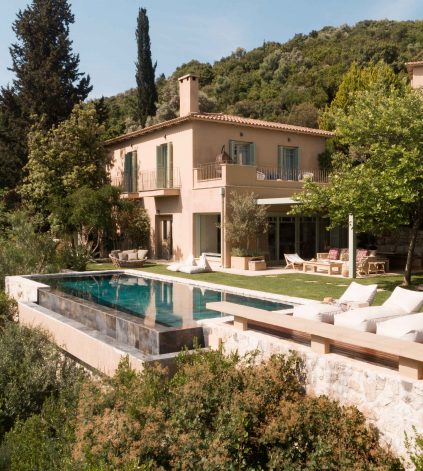 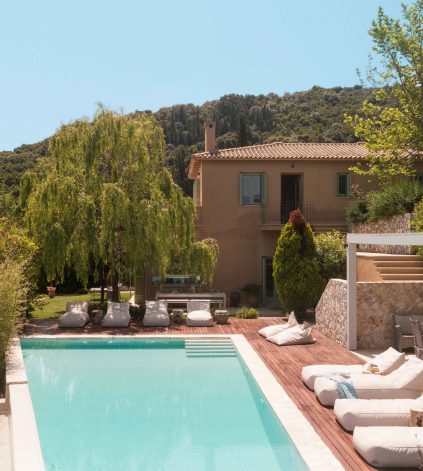