The regional unit of Messinia occupies the southwestern part of Peloponnese and totally inherits its diversity and immense natural beauty. Messinia boasts some of the peninsula’s most treasured beaches, settlements and villages, protected biotopes and wetlands as well as castles and archaeological sites of great historical importance. One of the most preferred holiday destinations for Greeks and foreigners alike, this part of Peloponnese has known great touristic development during the past decade featuring numerous high-end accommodation and entertainment facilities.

Traversing Messinia, the landscape completely changes from area to area creating a multifaceted canvas of endless olive groves, graphic fishing villages, calm beaches in endless coasts or secluded coves in its coastline areas and lush mountainous landscapes with thick forests, waterfalls and lakes in its mainland part. Apart from its pristine natural beauty, Messinia is also famous for its scrumptious local cuisine whose crown jewel is the locally produced olive oil that is considered to be the best throughout Greece and the Mediterranean.

The main city of Messinia, Kalamata, despite its size, it is considered to be one of the most charming cities of Greece that boasts a charming seaside promenade, easy access to the prefecture’s most quaint beaches and the rough mountainous landscapes of mount Taygetos. Kalamata is dotted with sizable squares, picturesque alleys and small taverns serving mouthwatering delicacies, all within a lively atmosphere of warm hospitality.

Almost adjacent to Kalamata you will find the Messinian Mani after traversing a ribbon-like road laced with thick forests of pine, cypress and olive trees. This part of Messinia, under the shadow of the imposing Taygetos, is a place of utter natural beauty with its fairytale-like villages that honour the local architecture. This area also boasts some of the best beaches not only in the Peloponnese but the entire Greece.

Found at the northwestern border of Messinia, the wetland of Gialova is one of the most treasured wetlands in Greece as it hosts hundreds of rare bird and animal species including flamingos, swans, mallards as well as the African chameleon who only reproduces here. Mind to have with you a camera and binoculars and head to the observatory spots to become witness of Gialova’s thriving, protected fauna.

Found almost in between Pylos and Kalamata, Polylimnio waterfalls is an astounding place of pristine natural beauty with dozens of small lakes, ponds and waterfalls. As you start hiking in the narrow – and slippery – paths ascending the mountain you’ll come across the first small ponds surrounded by lush vegetation. If you have the strength to climb higher, more beauties will unravel before your eyes and you will also have the chance to have a soothing swim in the cold waters of the lakes on your way.

Privacy, independence, elegance, breathtaking views our luxury villas will leave you in awe. Discover The Greek Villas in all 25 destinations in Greece and give yourself the chance to experience the best vacation you can imagine.
View All

Just like the entire Peloponnese, Messinia is a place that calls for endless explorations and road trips. The journey begins from Kalamata and Messiniaki Mani where you get a good taste of the Peloponnesian hospitality and exceptional gastronomy. In between, hiking lovers will have the chance to traverse the magical gorge of Rintomos, counting almost 19km, laced with small rivers, thick vegetation and steep rocks. Following the shoreline from Kalamata and Messini, the scenery changes a lot with numerous long, sandy coasts and traditional seaside villages that enjoy unobstructed views to the sea. Koroni will be your next stop, a stone-built village resembling a fortress town with slopy roads, small graphic alleys and a mystical aura. The castle of Koroni is thought to have been the most impenetrable castle of the entire Peloponnese.

Heading further to the south, Methoni will be your next destination; a small settlement whose coastline is adorned by its imposing castle that extends in the sea. Visitors can traverse the stone-built bridge and reach the outer part of the castle that literally dwells on the water. As you ascend the western coast of Peloponnese you will find yourself in Pylos, a calm and quiet seaside settlement that was the protagonist in the battle of Navarino but nowadays basks in the serenity of its setting. Visit the Archaeological Museum and head for a coffee or meal in one of its seaside restaurants that overlook the azure Ionian Sea.

Very near Pylos lies Gialova that is famous not only for its precious wetland and biotope but also for the popularity it got throughout the past decade from the nearby Coast Navarino resort. Gialova has been completely transformed from a traditional fishing village into a laid-back seaside settlement of understated luxury that hosts some of the world’s celebrities that stay at Coast Navarino facilities.

The mainland part of Messinia also boasts some hidden gems like the numerous wildlife shelters, the Archaeological sites of Messini, Polylimnio and numerous areas of untouched natural beauty as well as small, traditional villages.

One of the most popular beaches of western Messinia (Mani), Kalogria is a charming sandy shore, mostly organized and surrounded by green slopes.

An ultra-scenic coast found at the end of a small road in Messinian Mani, Foneas is a hidden gem with white pebbles and lush surrounding vegetation, completely unorganized.

Found as soon as you reach Kardamyli, this is a long and wide coast with whitish pebbles and transparent, azure waters that is partially organized but almost never crowded.

The favourite hangout for youngsters in Kalamata and nearby areas as it boasts numerous beach bars and a large coast with sand and small pebbles, partially organized.

The coast of the homonymous small village right at the foot of Taygetos where the lush vegetation reaches the sea. White pebbles, a blue flag and a serene ambience!

Only 5km from Kalamata’s centre, Verga is a pebbled coast with tranquil, warm waters that attracts youngsters due to the many beach facilities it offers.

Maybe the most organized coast of Messinia, Mpouka is a 3,5km long sandy coast with turquoise waters, ample facilities and an utterly vibrant ambience.

In the homonymous settlement 20km western from Kalamata, Velika is a long and wide sandy coast of pristine natural beauty and a popular meeting point for locals and visitors alike.

Another popular summer resort, Petalidi is a beach with pebbly coast and sandy seabed that has preserved its natural charms and offers natural shade as well as easy access to nearby smaller beaches.

A graphic sandy coast with calm waters and a charming setting featuring steep slopes with cypress trees in the backdrop, ideal for families and those who need utter relaxation.

Foinikounta
the coast of the homonymous popular summer resort, Foinikounta is a sandy coast with shallow, warm waters and many facilities that make it ideal for families with young children.

West of Foinikounta, you will come across a large and wide coast with golden sand and calm waters that deepen gradually making this coast also ideal for children.

Worldwide known for its peculiar size and the adjacent biotope of Gialova, Voidokilia is a heaven on earth with thin white sand resembling a circle that protects it from harsh winds and big waves.

Very near Voidokilia, the beach of Glossa on the Sfaktiria island is actually a small stretch of land that enters the sea, resembling a tongue (Glossa in Greek) and offers utter tranquillity.

Kalo Nero is part of the ultra-long western coast of Messinia which is actually a huge beach in itself. Golden sand and crystalline waters on a beach that never gets crowded.

Right at the border of Messinia the area of Elea features a sizable, wide coast surrounded by a lush pine forest ideal for naturists or just those who want to bask in the sun all day.

HOW TO GET TO MESSINIA

Messinia is reachable from Athens by car and visitors will be at Kalamata, the first and easiest step to this beautiful regional unit, in less than 3 hours. The road network is quite new in most parts, so the journey is quite easy. From Kalamata you can either head east to Messinian Mani or west to explore the treasures, seaside and mainland, of this beautiful part of Peloponnese.

Covering a vast extend, both in the coastline as well as the mainland part of the peninsula, Messinia offers countless options for accommodation and some of Peloponnese’s most exclusive luxury private villas. Scattered throughout the coastline, hidden within the traditional settlements or the lush verdant areas of the regional unit, here you will come across some of the most exquisite villas in Peloponnese covering all types of travellers and needs: romantic villas with private pools, sizable luxury villas for groups of friends, family villas or traditionally styled summer homes, whatever you need, here you will definitely have a vast array of options. Have a look around our website and do not hesitate to contact The Greek Villas’ team who will help you locate and book the most matching holiday villa in Messinia for your summer holiday. 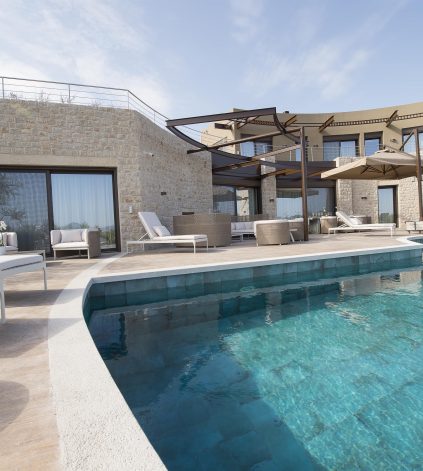 You have not favorites yet 😊

ENQUIRY
CALL ME BACK